What did you guys get in your mailbox this week? Hosted By Kristi @ The Story Siren.

Posted by Kelsey Simpson at 10:44 No comments:

Email ThisBlogThis!Share to TwitterShare to FacebookShare to Pinterest
Labels: Imm 10 in my mailbox 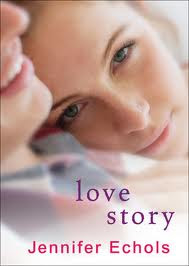 Summary:
For Erin Blackwell, majoring in creative writing at the New York City college of her dreams is more than a chance to fulfill her ambitions--it's her ticket away from the tragic memories that shadow her family's racehorse farm in Kentucky. But when she refuses to major in business and take over the farm herself someday, her grandmother gives Erin's college tuition and promised inheritance to their maddeningly handsome stable boy, Hunter Allen. Now Erin has to win an internship and work late nights at a coffee shop to make her own dreams a reality. She should despise Hunter . . . so why does he sneak into her thoughts as the hero of her latest writing assignment? Then, on the day she's sharing that assignment with her class, Hunter walks in. He's joining her class. And after he reads about himself in her story, her private fantasies about him must be painfully clear. She only hopes to persuade him not to reveal her secret to everyone else. But Hunter devises his own creative revenge, writing sexy stories that drive the whole class wild with curiosity and fill Erin's heart with longing. Now she's not just imagining what might have been. She's writing a whole new ending for her romance with Hunter . . . except this story could come true.

Review: So the story gets straight into it at the start with Erin attending college and within the few pages Hunter is also brought into it. I loved this about Jennifer Echols story her getting straight into it and not making the book go slow and explaining to much before the story actually happens. And right from the start the stories start with Erin and Hunter bickering all the time. That is the whole situation of this book, including the romance and tension heating up between the two, oh and about Erin struggling with money because her grandmother has decided not to help her out. You find when Erin writes her stories there always set around romance, history and of course a stable boy who Hunter knows is about him so getting her back he writers his stories which are quite different to Erins yet the same in so many ways. He writes about sex, doing it for the first time and basically about typical boys getting laid. And the two of them are both in the same college developing a friendship along the way.

I did like this book, espically the beginning because it was exciting and I couldnt wait for both characters to write more stories about the other. But about half way through once the stories wernt so great I started to get a little bored with it. Maybe its because the romance couldnt of developed anymore and that they needed maybe more of a plot with them to make it a little more exciting. I loved Hunters character the most. Even if he was hard to figure out in the beginning. I found he was a nice person and just didnt want to be a stable boy anymore. I found Erin to be annoying at times but I did like the fact that she was making a life for herself without money from her grandmother even if she struggled to pay for things, it got to show us that people worked well to earn off a college tution.
The ending was cute and it basically described the title of this book, I just could of used a little more excitment.

Overall I rate this: B
Posted by Kelsey Simpson at 12:45 No comments: 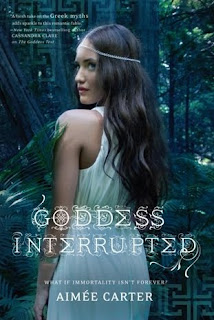 This wednesdays choice for me has got to be the second in the Goddess Test Series. Goddess Interrupted.

Summary: Kate Winters has won immortality. But if she wants a life in the Underworld with Henry, she’ll have to fight for it. Becoming immortal wasn’t supposed to be the easy part. Though Kate is about to be crowned Queen of the Underworld, she’s as isolated as ever. And despite her growing love for Henry, ruler of the Underworld, he’s becoming ever more distant and secretive. Then, in the midst of Kate’s coronation, Henry is abducted by the only being powerful enough to kill him: the King of the Titans. As the other gods prepare for a war that could end them all, it is up to Kate to save Henry from the depths of Tartarus. But in order to navigate the endless caverns of the Underworld, Kate must enlist the help of the one person who is the greatest threat to her future. Henry’s first wife, Persephone.

I cannot wait for this second book to come out. I have a major obsession with greek mythology, so of course I squeal when I know Aimee Carter writes more on this series. I loved The Goddess Test, so hopefully I will love this aswell.

WOW is hosted by Jill of Breaking the Spine.

Posted by Kelsey Simpson at 03:28 No comments:

In My Mailbox Number Nine.

In My Mailbox is a weekly meme created by Kristi at The Story Siren. 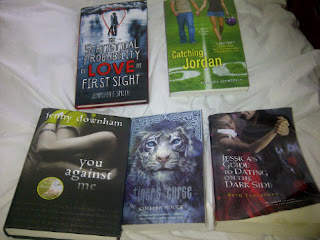 The past two weeks I picked up five books. Yay, Yay :O

1. The Statistical Probability of Love at First Sight By Jennifer. E. Smith.

3. You Against Me By Jenny Downham.

5. Jessica's Guide to Dating on the Dark Side By Beth Fantasky.

That is all in my IMM for this week. Have a fabulous week. And last of all what did you guys get in your IMM?

Email ThisBlogThis!Share to TwitterShare to FacebookShare to Pinterest
Labels: IMM books, In my mailbox

Review: The Beginning Of After 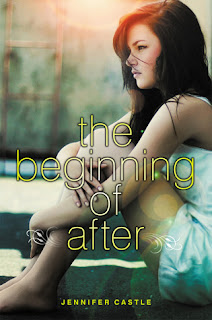 Anyone who’s had something truly crappy happen to them will tell you: It’s all about Before and After. What I’m talking about here is the ka-pow, shake-you-to-your-core-and-turn-your-bones-to-plastic kind of crappy.
Sixteen-year-old Laurel’s world changes instantly when her parents and brother are killed in a terrible car accident. Behind the wheel is the father of her bad-boy neighbor, David Kaufman, whose mother is also killed. In the aftermath of the tragedy, Laurel navigates a new reality in which she and her best friend grow apart, boys may or may not be approaching her out of pity, overpowering memories lurk everywhere, and Mr. Kaufman is comatose but still very much alive. Through it all there is David, who swoops in and out of Laurel’s life and to whom she finds herself attracted against her better judgment. She will forever be connected to him by their mutual loss—a connection that will change them both in unexpected ways.
Jennifer Castle’s debut novel is a heart-wrenching, surprisingly witty testament to how drastically life can change in the span of a single moment.

This book was a bit of a dissapointment for me. I didn't enjoy it as much as I thought I would. The summary got me really excited for this book, it sounded awesome. But my expectations were alot higher. The beginning of the book takes place on the day of the accident where both Laurel and Davids parents get into an accident. Killing all of Laurels family, and putting Davids father into hospital. It takes place basically around the aftermaths of this whole scene happeneing. With Laurel grieving and David coming in and out of Laurels life.

I felt the book was very slow. And even though the whole of the story is about 8 months to go into it, I felt like the story was really going anywhere much. I did like how they showed their emotions and how they had to deal with the tragedy, but I felt I wanted more. More plot line prehaps. The romance wasn't exactly the biggest plot going on in the story. And maybe if they did add more romance then it would of been more fun to read.

I did like the romance that their was though. Laurel and David were pretty cute together, but it so annoyed me how David would leave all the time. Laurels feelings for him were pretty weird aswell because one minute she didn't like him and then she did.

Although this book was slow and not very fast-paced, I did like the ending. I think they put the ending on a good note because the beginning was sad. I thought Jennifer had wrote a great epilogue and that it was the best way to end it, and not make it to dramastic.

My favourite character was her grandmother. I simply thought she was true to herself and played a great character and was their for Laurel when needed to be.

Overall I would rate this book C.

Posted by Kelsey Simpson at 14:34 No comments:

Email ThisBlogThis!Share to TwitterShare to FacebookShare to Pinterest
Labels: review The Beginning of after.

IMM(8)/Christmas Haul.
I got brought for christmas off my family:

The ghost and the goth. By Stacey Kade.

The Beginning of after. By Jennifer Castle.

Books I brought myself for christmas:

In My Mailbox is a weekly meme created by Kristi at The Story Siren.

Posted by Kelsey Simpson at 06:25 No comments: