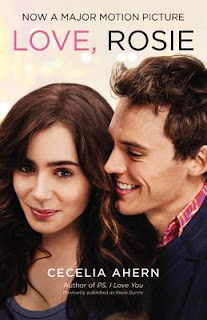 The basis for the forthcoming motion picture starring Lily Collins and Sam Claflin!

What happens when two people who are meant to be together can't seem to get it right?

Rosie and Alex are destined for each other, and everyone seems to know it but them. Best friends since childhood, they are separated as teenagers when Alex and his family relocate from Dublin to Boston.

Like two ships always passing in the night, Rosie and Alex stay friends, and though years pass, the two remain firmly attached via emails and letters. Heartbroken, they learn to live without each other. But destiny is a funny thing, and in this novel o f several missed opportunities, Rosie and Alex learn that fate isn't quite done with them yet.

Review:
This is one of those books that you hate and love at the same time. For me it felt like this.
We have our two mains characters Rosie and Alex who we read growing up together through writing to each other between letters and text messages. Of course along the way we read letters (Mostly between Rosie) and other characters connecting and interacting this way as well. We have Rosie who is the kind of girl a lot of people could relate too. She had a lot of realistic problems which in most books authors wouldn’t write upon. She was one of those people that had a series of bad luck in her life but where there’s a bad there’s a good, which I think was kind of the message this book was trying to give. You know never give up on things because there’s always a rainbow at the end. Then there was Alex who I felt was my favourite character in the book unlike Rosie I felt his life was a lot more successful and he had a lot more to give which we didn’t see because this book was based more around Rosie’s life. He was ambitious, determined and a supportive friend for Rosie whenever she need him.
Since this book is letter formed this is how we get to understand what is happening in the story. I honestly didn’t think I would of read this entire book because of it being in this form but I was surprised at how much I liked this different format it was a breathe of a fresh air and made it an easy read. Will definitely try more letter formed books.

Good points to the book:
I felt what I loved most about this book was the beginning and the end they both were great ways to start and finish a love story and I can definitely picture this being done well in a film. The beginning was funny because we read about Alex and Rosie being young in school so at times they acted childish and immature but their friendship was cute to read about, the beginning was a very light read it brings you back to when you were in school and going through puberty and all that.

Bad points to the book:
The middle of this book kind of bored me, that’s probably why I gave it 3 stars. It just lacked in places I had to keep putting it down because I wasn’t engrossed in the storylines because they weren’t really about Alex or Rosie together. And if there was any spark of any drama it was soon pushed back down after about two pages, so good parts didn’t last long. The chemistry for Rosie and Alex was frustrating as well because when one liked the other, the other one didn’t like them, it was kind of a circle that kept going round and I just kept getting frustrated wanting to smack them both in the heads and make them realise how delusional they both were and how they  both needed to just get it on and confess their love already.

Overall I think this makes a perfect summer read for those to take on holiday or to read on a beach. I read mine on the plane which helped me get through my flight.